This is what Parisians are waiting for all year long.  Many French people come from across the country and visitors from around the world come just to see them… The holiday window displays are back in Paris at last! Always a moving and exciting experience, they invite us into their enchanting world.  The magic of the holiday spirit re-awakens the inner child within each and every one of us to the jingling sound of bells and Christmas carols.

Which are the most beautiful window displays not to be missed with (or without) your children? Wether it is to do some Christmas shopping or just to enjoy the sights, here is a selection of the most beautiful Parisian facades in 2017 plus their photos!

Galeries Lafayette: features the world of the carnival 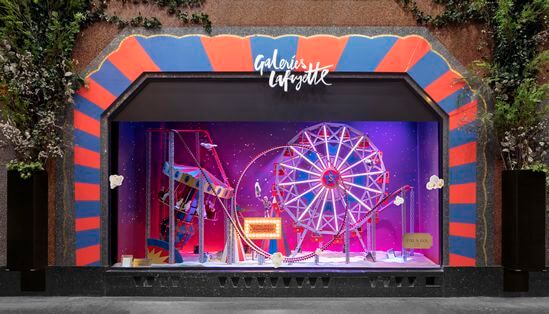 Once again Galeries Lafayette has lived up to expectations with their capacity to innovate, their displays are just as grandiose as ever. This winter’s facades illustrate the fairground a theme which has been brought up to date by the new release of « The Greatest Showman », a film with Hugh Jackman (showing in France in January 2018)

Every window is a masterpiece of adorableness and poetry. Mechanical dolls, dancers and musicians move to the rhythm of the music and the background sounds of the fairground. The color red predominates this festive decor, one can see animated Ferris wheels, a merry go round, popcorn machines, a hot air balloon.

But the highlight of the show is to be found inside!

This year, in 2017, an immense tree of sweets has the place of honor in the air, under the domed cupola. Balloons and appetizing treats float about in thin air. You can see the making of this spectacular ephemeral work on video

Named « Spectacular, spectacular », (in reference to the Moulin Rouge ?) Galerie Lafayette’s theme is sure to charm you while you are in the neighborhood.

The Printemps Haussman takes us on a voyage

The Printemps Haussmann invites us on a voyage across the world. Christmas, the extraordinary voyage of gifts. » Is a fable which tells the story of Jules and Violette, two children in search of gifts. Inaugurated by Nicole Kidman (multi-Oscar -winning actress as well as the mother of 4 children!), these luxurious window displays show the characters in different scenes from around the world, amidst perfume bottles, mountains of macaroons or designer handbags. The talents of an army of puppeteers and several months of work was necessary to create this work of art. A genuine animated picture right before your eyes. 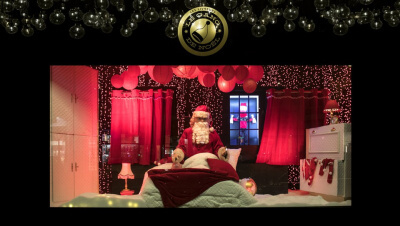 You are visiting the Left Bank near the Latin Quarter? Don’t miss the Bon Marché’s window displays. Even during the year there is always a good reason to stroll through this department store, whether it is to admire the French savoir-faire or make a stop at the Grand Epicerie.  This is the place to find that unique gift to delight the taste buds of friends or family.

For your visual pleasure, there are also the window displays…This year the Bon Marché windows displays are an invitation to Santa Claus’ Christmas toy’s workshop. The dear grandfather adorned in red prepares his toys which can be found inside the store.  Helped by small elves, the story of Christmas comes to life.

The BHV the Marais : Featuring Denmark and Andersen’s fairy tales 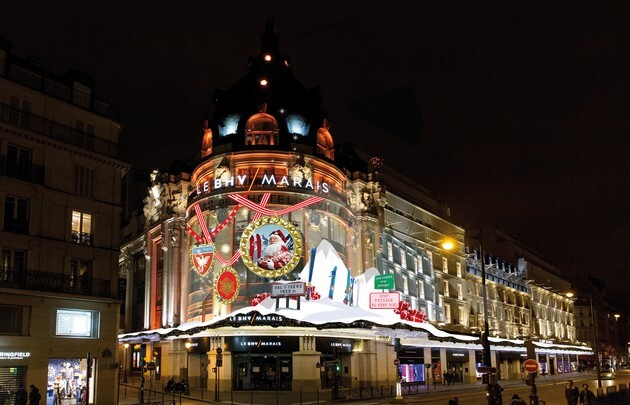 If you are visiting Paris or Christmas shopping, the BHV is a must. Situated across from the Hotel de Ville and a few steps away from Notre Dame cathedral, in the heart of a trendy neighborhood, the BHV is obligatory before the Christmas holidays.  The guest  of honor is Denmark this year  : you will discover a Scandinavian Christmas inspired with stories from Andersen’s fairy tales with animated figurines. In the windows, an Ice Queen and  elves fuss around a  table, white swans pull a sled…Scenes from the bedtime story tales told to generations of children.

As a bonus inside the store: arts and craft workshops, storytelling (2nd floor), and culinary animations exploring Danish cuisine.

Take a dive back into to your childhood memories without hesitation. Merry Christmas!

Anne-Laure traveled throughout Europe during the golden age of the Erasmus exchage program. She has kept unforgettable memories of her student years and loves to share her love of traveling with her husband and 2 children. She likes the friendly atmosphere of youth hostels as well as appreciating comfortable hotels.

In a great location, the Avalon Hotel*** combines a chic parisian ambiance with a contemporary style to give a warm and cozy atmosphere to this elegant hotel.